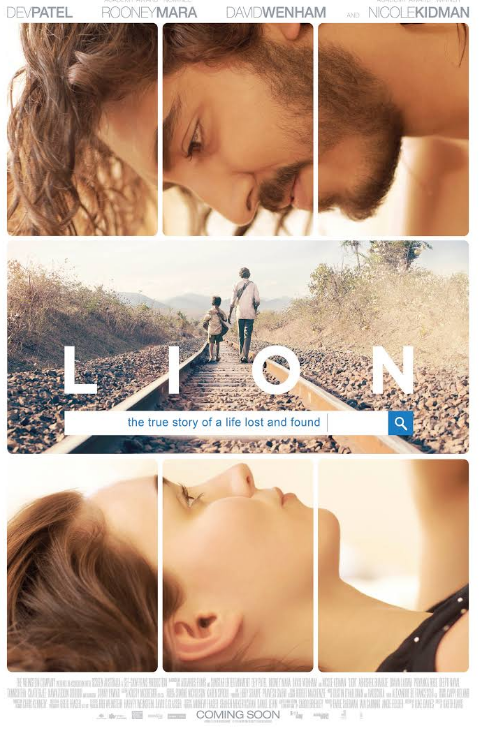 The movie Lion caught our attention as the perfect vehicle to launch our new Birth/First Mother Point of View (POV) program. Not only has it been nominated for an Oscar, but the narrative centers on the true experience of an adoptee driven by a strong desire to reunite with his first/birth mother.

Plot:  Based on a true story, Lion follows Saroo, who in 1986, was a five-year-old child in India of a poor but happy rural family. On a trip with his brother, Saroo soon finds himself alone and trapped in a moving decommissioned passenger train that takes him to Calcutta, 1500 miles away from home. Now totally lost in an alien urban environment and too young to identify either himself or his home to the authorities, Saroo struggles to survive as a street child until he is sent to an orphanage. Soon, Saroo is selected to be adopted by the Brierley family in Tasmania, where he grows up in a loving, prosperous home. However, for all his material good fortune, Saroo finds himself plagued by his memories of his lost family in his adulthood and tries to search for them even as his guilt drives him to hide this quest from his adoptive parents and his girlfriend. Only when he has an epiphany does he realize not only the answers he needs, but also the steadfast love that he has always had with all his loved ones in both worlds. -Written by Kenneth Chisholm

Adoption is not a common focal point of Oscar-nominated movies. But when it is, the adoption community takes notice.

As a birthmother in a domestic adoption, I am unfamiliar with international adoption issues, which makes it difficult for me to measure the presentation of this story against reality. From my experiences, though, a few points stood out to me.

The story as a whole is very emotional and heartwarming in the end. Both the birthmother and adoptive mother express goodwill and gratitude toward each other.

The adoptive parents are clearly painted as “rescuers.” Perhaps it could be argued that what Saroo needed was more help finding his mother, instead of a one-way trip to a wealthier country with foreign parents. However, the resources available in the late 1980s were much more limited that what’s available today – Saroo relies on Google Earth to find his hometown – so adoption really may have been the best solution for Saroo. Like many adoptions, though, a lingering “what if?” is attached.

Since this movie is an adoption story, some aspects may be triggering to birthmothers. In particular, birthmothers who have been separated from their child/ren for a long period of time may find Saroo’s struggle and eventual reunion with his birthmother difficult to watch.

Also, because the story is told from the adopted child’s point of view, it clearly illustrates a common fear of birthmothers: that the placed child/ren will feel something big is missing because he/she was separated from his/her birth family. Saroo obviously agonizes for a number of years while worrying about his family of origin and searching for them. This might especially be triggering for birthmothers who continue to wonder if they made the right decision for their child/ren, or for birthmothers whose child/ren are somehow suffering after being adopted.

The POV series is a forum for the voices and opinions of birth/first mothers to react to birth mother representation in popular culture. The views and opinions expressed are those of the author and do not necessarily reflect those of OYFF.  If you are a birth/first mother interested in having your voice heard as a POV Reviewer, please email Jenny Sindel at jenny@onyourfeetca.org.