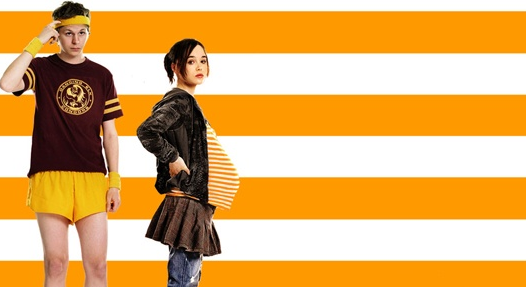 2017 marks the 10-year anniversary of the release of the movie "Juno".  Following is Pearl Chen's review; OYFF's 6th Point of View piece.

Juno (played by Ellen Page) is a quirky, witty high school junior who finds out she is pregnant after a bored afternoon fling with her friend, Paulie Bleeker. After leaving mid-appointment before the local health clinic is able to “procure a hasty abortion”, Juno decides to place her baby for adoption. Juno and her father meet the prospective adoptive couple, Vanessa and Mark Loring, and Juno strikes up an instant friendship with Mark over their love of music and horror movies.

As the months--and Juno’s pregnancy--progress, her relationship with Paulie becomes complicated as his affection for Juno grows and she responds to his feelings with indifference. Juno’s friendship with adoptive father-to-be Mark continues to deepen and Mark reveals to both Juno and Vanessa that he is not ready to parent, and wants a divorce. Disheartened, Juno asks her father if two people can ever stay together for good. Juno’s dad offers advice that makes Juno realize that she loves Paulie in return, and the two make up at the school track field. Soon after, Juno gives birth to a baby boy and Vanessa adopts the baby as a single mother. The movie ends with Juno and Paulie playing on their guitars and sharing a kiss.

“You’ll never guess what they made a movie about.”

… said my best friend over the phone as we were catching up, two months after the placement of my newborn daughter ten years ago, in 2007. It took me another two years before I felt brave enough to tackle watching Juno. Since then, I’ve always said that it would be one of my favorite movies if I wasn’t a birthmother. The humor is clever, the music is awesome, and the characters are memorable, especially the titular Juno MacGuff.

I honestly feel that the creators of Juno didn’t set out to lie about or dramatize birth/first mothers. The plot comes off as an amalgamation of many different birthmom stories that then skips over the parts that matter in adoption. The movie makes the effort to heartwarmingly detail Vanessa’s “bond” with the baby but moments that involve Juno talking about her pregnancy are almost all for audience laughs. Juno chooses a closed adoption, and while the decision was hers to make, some insight or dialogue into the reasons behind it would have humanized her attitude toward what is a life-changing experience. Where is the part where Juno gets thrown back into high school as a senior who has to face the emotional trauma and grief of giving birth and placing her baby--and with only half of the couple that she originally chose? While no amount of movie time is enough to convey the lifelong, complex, and diverse emotions birthmothers feel, a two-minute scene in the hospital falls incredibly short.

There are also aspects of the story that feels like a bunch of people who didn’t have personal experiences with adoption were asked to simply guess what an adoption looked like. Teenage pregnancy? Check. Huge socioeconomic disparity between adoptive family and birthfamily? Check. Weird, awkward relationship with a goofy, non-involved birthfather? Check. Weirder, even more awkward relationship with the adoptive father-to-be? Check.

Although I know that this movie is meant to entertain and not educate, the creators talking to real life birthmothers ahead of writing and filming was a missed opportunity to make something more realistic but just as uniquely wonderful.

The POV series is a forum for the voices and opinions of birth/first mothers to react to birth mother representation in popular culture. The views and opinions expressed are those of the author and do not necessarily reflect those of OYFF.  If you are a birth/first mother interested in having your voice heard as a POV Reviewer, please email Jenny Sindel at [email protected].