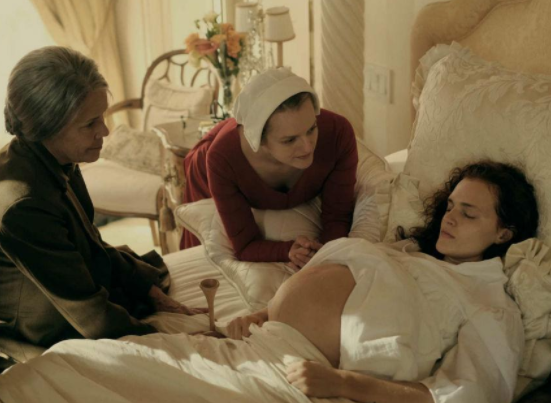 “There are to be no toeholds for love. We are two-legged wombs, that’s all: sacred vessels, ambulatory chalices.” ― Margaret Atwood, The Handmaid's Tale

The Handmaid’s Tale is a HULU produced television series based on Margaret Atwood’s best-selling dystopian future science fiction novel.  In the totalitarian, biblically based society of Gilead, which used to be the United States, environmental collapse has led to widespread infertility and the remaining fertile young women are forced to become breeding servants to the rich and powerful couples who now rule their world.  The story is told from the perspective of June, whose daughter and husband have been taken from her and who is fighting for her sanity and survival in her new role as a frequently beaten and sexually assaulted Handmaid for the Commander Waterford and his coldly fundamentalist wife, Mrs. Waterford.

I hosted a weekly Wednesday night watch party as The Handmaid’s Tale unfolded because I love Margaret Atwood’s writing and world building and this novel in particular. This current political moment demanded careful attention be paid to the warning bells in The Handmaid’s Tale, with its eerie mirroring of the rise of fundamentalist politicians and the escalating erosion of women’s reproductive rights in real life. I watched each week alongside other social workers, activists, organizers and advocates for social justice and we shared in the fear and horror of the trauma inflicted on the Handmaids and the other casualties of white supremacy and unbridled misogynist power.

However, as a birthmother, I felt uniquely alone and paralyzed by a primal un-namable burning hot emotion during the scenes where a Handmaid was in labor, impregnated by her state sponsored domestic rapist, and surrounded by other Handmaids whose job it was to support and sanctify her sacrifice. The defeated wailing of the birth/first mother Handmaid struck such a nerve that I had to excuse myself for a few moments. I have heard that wail before, from other women who have relinquished babies for adoption or lost children to the foster care system. It was impossible to watch these scenes and not draw parallels to the adoption industry and to the narratives of ‘choice’ in the reproductive justice movement.

Watching the Handmaid’s Tale week after week as a birthmother was a minefield of triggers, but the optics helped solidify a sense of resistance and analysis of where the adoption industry and our current political battles are heading. I highly recommend watching it yourself, with friends, chocolate, wine, a box of tissues and a plan to join the reproductive justice revolution.

The POV series is a forum for the voices and opinions of birth/first mothers to react to birth mother representation in popular culture. The views and opinions expressed are those of the author and do not necessarily reflect those of OYFF.  If you are a birth/first mother interested in having your voice heard as a POV Reviewer, please email Jenny Sindel at [email protected]